192 Views
Comments Off on Afghan Cycles, Mountain to Mountain, and Pedaling a Revolution
0 0

Afghan Cycles, Mountain to Mountain, and Pedaling a Revolution

Afghan Cycles, Mountain to Mountain, and Pedaling a Revolution 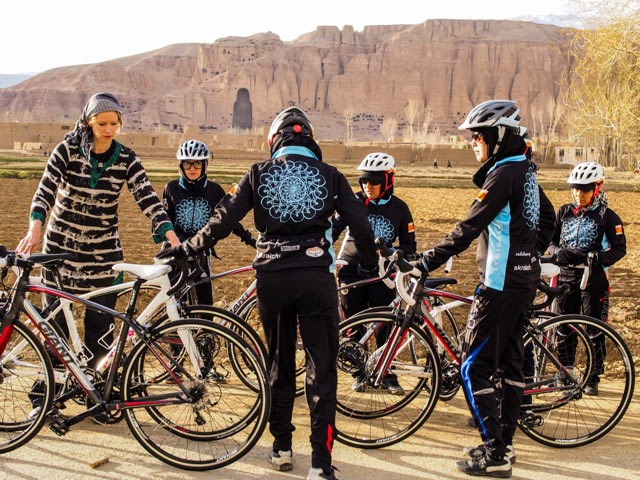 Shannon Galpin has been busy. As the founder of the national women’s cycling team in Afghanistan, she’s been there working to get the team race-ready. As an author, she’s released her first memoir, Mountain to Mountain, and has been on tour visiting bookshops across the country. And as a cyclist, she’s been sneaking in as much on-bike time as possible in the whirlwind that is her life. We were lucky enough to catch up with the women’s rights and cycling activist before her winter travel started back up again.
So, what have you been up to since your book, Mountain to Mountain, came out?
I had multiple trips to Afghanistan last year, and then it was book-tour craziness—New York, Austin, Portland, North Dakota, Boston, all over Colorado. But then I had a good break over the holidays. Now I have four cities coming up and a return trip to Afghanistan. And we’re deep in the edit cave, trying to get all the pieces together to release Afghan Cycles! We’re raising money for what we’re hoping is a huge launch next year [early 2016]. We’re getting the documentary rolling. We had another shoot earlier this year with some of the girls riding separate from the team in rural areas, which is supercool. It’s just the fundraising that’s tough. Everyone loves these girls and this program, but if you want to support them, it takes money just like it does for any other team.
Has any of the political stuff happening lately had an effect on the funding?
Yes! Especially the Charlie Hebdo attacks in Paris. Two of our partners were European, and they pulled their programming, which essentially meant [losing] two trips for the team. I fought hard to get them to change their minds, but they just don’t want to align with anything that could be perceived as controversial. In the wake of Malala winning the Nobel Peace Prize, it’s hard to think of these girls as controversial at all. They’re inspirational! They’re the people you want to get behind. They’re the potential for change.
By http://www.bicycling.com/news/advocacy/afghan-cycles-mountain-mountain-and-pedaling-revolution
Article Categories:
Afghan Girl · Afghan People · AFGHANISTAN