ALEXANDRIA ON THE OXUS?

Written by
Share Tweet Pin it Email WhatsApp
ALEXANDRIA ON THE OXUS? Ai-Khanoum was one of the primary cities of the Greco-Bactrian kingdom. Previous scholars have argued that Ai Khanoum was founded in the late 4th century BC, following the conquests of Alexander the Great. Most recent analysis now strongly suggests that the city was founded after 280 BC by the Seleucid king Antiochus I. The city is located in Takhar Province, northern Afghanistan, at the confluence of the Oxus river (today’s Amu Darya) and the Kokcha river, and at the doorstep of the Indian subcontinent. Ai-Khanoum was one of the focal points of Hellenism in the East for nearly two centuries, until its annihilation by nomadic invaders around 145 BC about the time of the death of Eucratides. The site was excavated through archaeological searches by a French DAFA mission under Paul Bernard between 1964 and 1978, as well as Russian scientists. The searches had to be abandoned with the onset of the Soviet war in Afghanistan, during which the site was looted and used as a battleground, leaving very little of the original material. 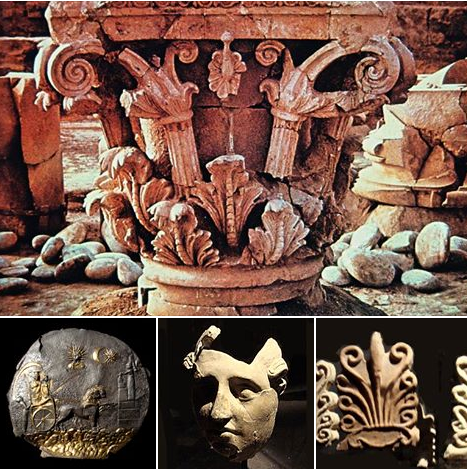